The bicycle-friendly city label was acquired by the Municipality of Chios, the 8th in a row municipality in Greece, which was awarded the “Bike Friendly Destination” (certification for promoting Chios as a cyclist-friendly destination) by General Manager of NatTour, Mrs. Vicky Karantzavelou.

Receiving the award, the Mayor of Chios, Mr. Stamatis Karmantzis, underlined that this award highlights Chios as an environmentally friendly place, adding that the Municipal Authority is carrying out works in this direction. Ms. Karatzavelou thanked the Municipal Authority for its efforts to make Chios a bicycle-friendly city, while adding that this award will attract visitors who will be able to enjoy its beauties by bicycle.

The Deputy Mayor of Tourism, Mr. Kostas Verginas, referred to the actions taken by the Municipal Authority, in order to be honored with this certification, estimating that it opens new roads in attracting tourists.

On the part of institutions, everyone underlined the tourist opportunity that this certification gives to Chios, emphasizing that the island is now included in the world map of cycling destinations.

The President of the Cyclists Association, Mr. Panagiotis Sitaras, referred to the importance of proper learning and observance of the proper road traffic behavior for young children, in order to travel around the city on a bicycle. 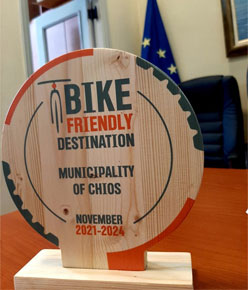 Chios is one of the few islands that due to its size, rich natural and cultural landscapes and the variety of routes it offers, is suitable for cycling. In recent years, cycling has developed a lot, with the result that the activities related to it are constantly increasing. There are even organized clubs that often plan from simple leisurely walks in various locations of the island, to organized sports activities and games. Cycling in Chios is found in three basic forms: in amateur cycling (cycling tourism) which is expressed through walks in the urban fabric and in the villages, in racing cycling and the races that accompany it and, finally, in mountain biking with wanderings through forest and rural areas, mountains, ravines and bike paths.

Cycling tourism in Chios offers the visitor a different experience, as he can spend more time in nature to discover the landscapes and wealth of the area, thus knowing a different side of the island.

Every year many sports activities are organized, culminating in “Brevet Chios”. This is one of the biggest cycling events in Greece, a test for tough cyclists, with participations not only from Chios, following a route that crosses the entire island and travels a distance of 200 kilometers. For lovers of mountain biking there are various (unorganized) routes of the island, such as Provatas, Nea Moni, Agioi Pateres, Anavatos, Retsinadika, Pelinnaio etc. for a more extreme experience.